A Troglodyte’s foray into Roon

Let’s just get this right out of the way:  I am not an audiophile expert.  Those that possess decades-long careers in the music, engineering, and journalism business will know more after a week-long binge of huffing markers and cartridge toner than I ever will.

After the lingering effects of the five finger discount work Sharpie fumes have worn off, what I can claim is that I have spent an inordinate amount of time over the last ten years working with personal digital audio, and have learned a lot.  I became a self-taught iTunes guru more out of necessity than fondness; and as I dimly recall, the first step down the rabbit hole was buying my first iPod in 2005 and taking all my CDs, then numbering approximately 500, and loading them onto the hard drive using the AAC encoder.

Then, about three years ago, when I moved to Florida, I had completed the transition to all Apple devices with a MacBook Pro, iPhone, iPad, etc, and was trying to use iTunes seamlessly with these devices.  The storage had gotten so much bigger and less expensive, I was ready to re-rip all my CDs to lossless files.  That was the beginning of “The Troubles.”

The real pain started with trying to get iTunes Match and iTunes in the Cloud to blend seamlessly.  No matter how many times Apple support tried to explain it to me on the phone, I could not get it to jive correct.  I even have conspiracy theory-level doubts that these two things were actually a different entity.  I even got as high as the VP of customer support at one point, and he basically agreed with me that something didn’t make sense.  This whole Wagnerian Cycle took several months of phone calls with The Apple support peeps. While Apple does support certain hi-res content, at the time it wouldn’t’ load hi-res files above a certain size into the cloud, which turned out to be the root of the problem and was eventually fixed with the release of Apple Music, which to my plebeian mind essentially merged these two services into a cleaner streaming entity.  More importantly, the cloud accepted larger hi-res files, although I cannot confirm what that maximum size/type file is.

Apple Music worked pretty well for a while, but I knew the source sound quality was not up to snuff to feed my moderately high priced system, so I tried Audirvana+ for a while.  I found it to be altogether acceptable, but honestly not worth the effort of trying to make it work; the rate of return on investment both time and monetarily was not showing up as significantly better sound quality over iTunes.  Additionally, I could never get it to work in sys-optimizer, in which is specifically prioritized the music chain, ostensibly to improve sound. 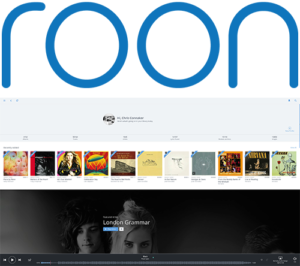 Enter Stage Left–> Roon 1.2.  I’ll try not to swoon in the style of Scarlet O’Hara watching Ashley Wilkes drop trou, but suffice it to say, I am hooked.  Marion Barry’s love affair with Snowy White pales in comparison.  So far in my experience with Roon 1.2, I have been thrilled to see so many modalities and options flowing in such a clean and seamless way, making the user interface just an absolute joy with which to work.

I did have a bafflingly ridiculous time trying to get my NAS folder mounted, and after some chicken bones, gourd-shaking, and chanting (You’re chanting, Ray: Satan is good, Satan is our pal, etc) it magically showed up.  The craziest thing was that I had no idea what I did differently.  The Roon guys were super-helpful and extended my free trial, and now that I have everything running smoothly I am almost guaranteed to buy the one-time $499 fee.  To me, that’s an excellent rate of return given my gnashing of teeth and trichotillomania that was “living and dying in 5/4 iTunes time.”  Even more oddly enough, when fooling around with a SonicOrbiter the next week, I had absolutely zero issues, but that’s an issue for another post.  Maybe the sacrifice of one of the ubiquitous Key West chickens gave me enough Juju to spar with the Roon “Grid” without being kicked off my Tron Bike.

An Audiophile’s musings on the subjectivity of hi-fi