The Hi-Fi Skyn from CEntrance: A Review 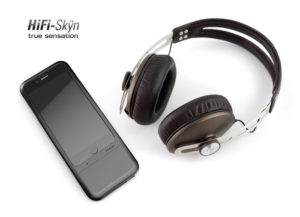 About eighteen months ago, the guys from CEntrance (the same group that brought you the wildly popular HiFI-M8 dual input/output DAC) started an IndieGoGo campaign for their next biggest and brightest idea, the Hi-Fi Skyn.  This device encases an iPhone and adds an audiophile-quality DAC, headphone amp and external battery, essentially turning one’s iPhone into a DAP.  The campaign was wildly successful, and CEntrance was able to add several upgrades to the device including a more powerful amp, various color options, and an upgraded DAC.  Needless to say, I was very eager to get my hands on one, especially since my crowdsourcing price was <$300 and it now retails for $399.99, approximately half  of the nearest standalone DAP.

Due to the inherent streamlining with Apple that this product required, CEntrance had some challenges to overcome with its integration, particularly with Apple’s in-house testing.  This resulted in some unavoidable delays in production and release.  Once it arrived, however, CEntrance lived up to its end of the bargain, and from an engineering standpoint alone the finished product is a remarkable testament to their dedication.

The case is made from durable polycarbonate, and I ordered a standard black nonslip soft-touch finish. for my iPhone 6 (5, 6S, 6 plus, and iPod touch sizes are available as well.)  The product came very well packaged and was a snug and almost perfect fit for my device.  The DAC will decode PCM up to 32/384 and DSD128 from an AK4490 chip with two independent 1ps clocks.  The class A headphone amp provides a whopping 410 mW at 32 ohms.  The output impedance is approximately 1 ohm, with a frequency response of 20 Hz-90kHz, SNR at 110 db, with THD around 0.002%.  Probably the most innovating feature of the amp is a gain switch with three settings:  IEM, line-level, and over-ear.  This gives the device a quoted support of headphones ranging from 16 to 600 ohms, enough to power the vast majority of IEMs and persnickety over-ears.  The battery allowed nonstop play with my Beyers for about 8 ½ hours. 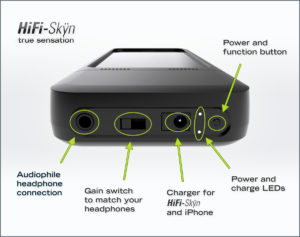 Setup is extremely easy; plug your iDevice, snap the cover on, select a gain option, plug in your monitors and go for it!  Am I forgetting something?  The most recent iOs will only support files up to 24/48, mp3, WAV, and ALAC but not FLAC, AIFF or DSD.  For hi res files a separate app is needed.  There are several options on the app store, but I automatically eliminated any selection that cost more than $9.99 or had in-app purchases, and then tried the top three downloads.  By far the most popular right now is the Onkyo HF player, which has also gotten overwhelmingly positive reviews online.  There has been a recent burst of other available apps; the other two that I have tried are relative newcomers, ELECOM and Kalliopeia.  (Update:  The bummer with these apps is that they don’t speak to each other, i.e. one has to duplicate copy files, so it’s best to choose one over the other for the long term.)

Once the Onkyo is installed, it’s pretty easy to drag and drop hi res files through the iTunes app.  It’s not iTunes per se; one has to hardwire the phone to the computer, open iTunes, sync the device, and open the device’s app list to drop music files into Onkyo HF.  The files show up as “documents and data” under the data bar at the bottom of the iTunes screen.  I happen to like Onkyo the best so far, but since this review is more about the hardware I’ll let you come up with your own opinion about apps and focus on the Hi-FI Skyn.

So:  How to describe the sound?  In my opinion, CEntrance has been –very- successful in designing an excellent DAC/HPA that operates seamlessly with an iPhone, both structurally and functionally.  Using the line-out with my heavily modded Beyer T70ps which average around 32 ohms, the dynamics and sound quality are excellent and a huge step up from the internal hardware.  With the IEM gain setting and driving a pair of custom fitted Shure SE535s, I was impressed at the amp’s ability to adapt to different loads.  Finally, in the vein of lessening variables, I borrowed a pair of Beyer T70s with an average impedance of 250 ohms and put the gain switch to high.  This setting really was the best of the three in my opinion, and were it not for the size of the Beyers I would use this mode exclusively for hi-fi on the go.  I’m anxious to see how this unit works with some smaller and more portable on-ear planar magnetics like the Oppo PM-3 but have not had a chance yet.  I suspect this would be an absolutely ideal balance between sound and size.  Combined with the extended battery life, it’s an absolute no-brainer for those looking to get into DAPs to start with this, especially if they have an extra iPhone lying around and want to breathe life back into it.

The best thing I can say about the Hi-fi Skyn is that I almost forget that it’s even there, and in that sense I believe CEntrance has succeeded beyond expectations in integrating an awesome sounding HPA/DAC with the smooth ergonomics that everyone has come to expect with an Apple product.  This is a real statement considering the difficulties that companies experience when it comes to Apple-approved product and accessory testing.  The main drawback that CEntrance faces at this point is the inherently fixed sizing of the Hi-FI Skyn versus how often Apple has turnover in its devices and dimensions.  There could come a point where the amount of time and resources a smaller company has to dedicate to a project like this could be outstripped by the Cupertino juggernaut’s relentless changes to one of the world’s ubiquitous accessories.  Until then, however, we’ve gained a worthy addition to the growing stable of iPhone-compatible HPA/DACs.

An Audiophile’s musings on the subjectivity of hi-fi

Hi-Res Software for your new iPhone 7