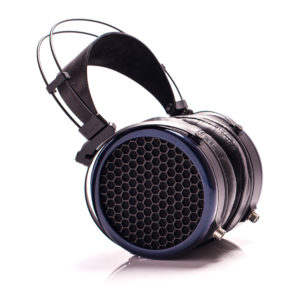 Do you, my dear faithful reader, wonder why it is that I tend to review the equipment I’ve already bought?  Well, one is a bullshit reason, and one not so much.  The first is no one sends me free stuff for review.  The second, slightly more sensible reason, is that I’ve already burned through a bunch of mediocre equipment and rejected it, and the remainder is stuff you’d actually want to buy.  That is also in part why you don’t see a lot of overtly negative reviews.  It pisses manufacturers off, and who really wants to read “This product sucks, don’t buy it”?

Thankfully, that won’t be a problem with the newest release from MrSpeakers, the Ether Flow.  This open-back planar magnetic headphone is really at the pinnacle of head-fi technology, and I think you’ll agree.  Dan Clark at MrSpeakers has really leapt on to the hi-fi stage over the past few years, first by heavily modding Fostex offerings with redesigned CNC’d closed backs, and then really getting into the guts of the drivers and wiring.  The results, MrSpeakers Alpha Dogs, and AD Primes, sold like gangbusters.  So, when Clark began to grow beyond modding dynamic drivers (albeit very successfully) he took a real leap of faith and began to envision a planar magnetic headphone completely redesigned from the ground up.  Dubbed the Ether, these debuted in 2015 and came in both open and closed back designs.  They were almost universally lauded with their great bass in the closed back form and the killer holographic soundstage in the open backs.  Not one to rest on his laurels, Clark embarked on a major mid-cycle redesign of his flagship headphone, now dubbed the Ether Flow.  The magnets inside the cup have now been redesigned using the latest generation in modeling software to maximize air flow around the magnets and minimize turbulence, therefore improving efficiency of the energy transferred to the diaphragm.  Additionally, that diaphragm now sports V-Planar technology, which is best explained from direct website quotes:

“V-Planar technology addresses nonlinear driver motion by more deeply creasing the diaphragm to increase compliance.  Much as pleats allow an accordion to expand and contract without stretching the fabric, the creases in the driver “open” slightly during larger excursions as illustrated in Figure 2.  When the driver is processed, the resultant peaks and troughs are deep enough to maintain more of their physical structure even after the driver has been tensioned.  Increasing driver compliance allows it to behave as a more idealized planar surface.  With more of the driver surface in linear motion, V-Planar can not only push more air at low frequencies, but with greater acceleration also delivers better dynamics, high-end frequency response, and measurably lower distortion.” 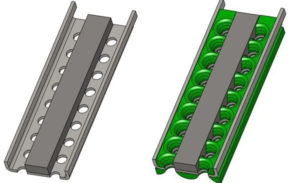 I jumped at the chance to order these beautiful headphones once they were released into the US market.  I initially planned on using them with some of my portable equipment, i.e. the Onkyo DAP or my iPhone/Dragonfly combo, so had originally ordered them with a 4 foot unbalanced 3.5mm “DUM” proprietary MrSpeakers cable.  As my listening progressed over the next few weeks, however, I splurged and ordered 2.5 mm balanced and 4-pin XLR DUM cables so that I could use them with the Bal output on the Onkyo as well as the XLR output on my Vinnie Rossi LIO.  Needless to say, it’s been a real party lately putting these cans through their paces.

In terms of ergonomics, these are some of the most comfortable headphones I’ve w0rn.  Since they’re open back planar magnetics, they are a smidge heavier than their dynamic driver counterparts might be, but the absolutely ingenious leather headband and self-tightening Nitinol metal bands have make for about as a fatigue-free listening period as I could have hoped.  The cans come with a very high quality plastic MrSpeakers case for travelling purposes. 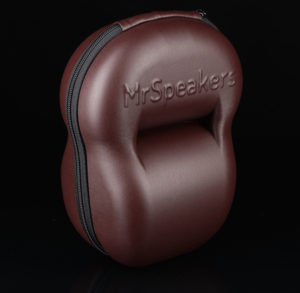 It happens to be that I’m in a real Pink Floyd mood lately, so I initially fired up the Ether Flows to my iPhone/Dragonfly and queued up my FLAC 16/44.1 version of “Shine on You Crazy Diamond” off Wish You Were Here.  Ostensibly a send-off by Roger Waters and David Gilmour for former bandmate Syd Barrett, the opening track is an absolute magnum opus of Seventies atmospheric rock, and boy did the Ether Flows marry well with that.  Listening to Roger Waters’ creepy laughing coming five feet from behind my left shoulder literally freaked me out until reality set in.  The languishing but building guitar riffs had amazing detail, easily being picked out as Gilmour’s trademarked heavily compressed single coil Strat.

Moving on to the Onkyo as a source, I queued up the iconic Floyd album The Wall.  This is one of my favorite reference albums, since I know the damn thing by heart.  (How can you have any pudding if you don’t eat your meat? Etc.)  I chose to use the 2.5 balanced DUM cables this time around, and was not disappointed.  The sound is absolutely enriched with layers and layers of soundstage; I can hear Waters change from thumb to plectrum on his excellent bass work, while Gilmour soars into his air guitar-worthy solos in seemingly effortless fashion.  Those damned scary-ass taskmasters from the playground sound at least thirty feet behind my shoulders.  By the time “Young Lust” has played in the background, we’re hearing “This is the United States calling are we reaching?” clear as day.  Apparently he didn’t want to accept the collect charges.

Those of you who plan on using these headphones mainly in an in-house capacity with a desktop amp could be in for a real treat.  I specifically ordered the 4 pin balanced XLR cables from MrSpeakers so I could try them on the LIO’s headphone amp.  In a word, with Vinnie’s new tube preamp, the combination was just stunning.  Holographic soundstages leapt from the speakers as if I had just sat down to the front row of my favorite venue.  I did a lot of critical listening with some of my reference acoustic guitar music with this combo, and the Ether Flows absolutely shine in this capacity.  Altan’s “Donal Agus Morag” from The First Ten Years made me feel as if I was sitting in a pub in my mum’s native Donegal, two pints of Guinness already done for, right in the middle of the band.  A more contemporary acoustic guitar recording came from Andy McKee’s 2014 EP Dreamcatcher, the eponymous track.  McKee’s absolutely cavernous Greenfield G4 jumbo guitar reverbs through the soundstage as if one were listening from inside the guitar.  Do yourself a favor and try out this combo at your next show like RMAF or AXPONA.

Now, here’s the thing:  For $1800 these headphones better make you a damn good cup of Starbucks in the morning.  That being said, I think that it would take an absolutely phenomenal open back planar magnetic to replace these in my stable, and I can’t see that happening in the foreseeable future, and certainly not at this price point.  I wanted a flagship open back planar magnetic, and that’s what it looks like I got.  A very highly recommended product.