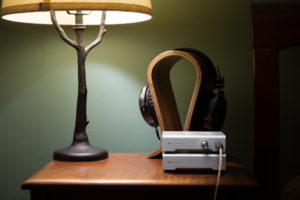 Everyone’s favorite punny yet cost-conscious company is doing their Shtick again, creating extremely well-made American products at insanely low price points.  That, oh by the way, have some of the most advanced software technology currently available to consumers, and outputting some of the best sound (not even for the money) that one can currently enjoy.  They’ve done a fantastic job focusing on desktop head-fi products, from DACs, solid state amps, tube hybrid amps, and USB signal processors.  In this two-part series, I’ll first be reviewing the Modi 2 Multibit DAC, and will then focus on the Vali 2 tube hybrid headphone amp.

Mike Moffatt and Jason Stoddard have made a pretty good name for themselves in the 2-channel high fidelity audio crowd by getting their company up and running through sheer will alone, and in the process creating some of the greatest new gear that us head-fi geeks have had the pleasure of hearing over the past few years.  Their products are almost universally great, and almost absurdly underpriced.  The fact that they are also benignly crazy and funny as hell just is a bonus as far as I’m concerned.  When the Modi 2 Multibit DAC was released earlier this year, I eagerly purchased a unit, mainly so I could experience what all this multibit digital filter technology was all about.  This “burrito” filter found in the Yggdrasil, Bifrost, and Gugnir DACs has now trickled down to their least expensive (and most physically diminutive) DAC in their lineup.  Instead of sounding like a dumbass, I’ll let the experts from Schiit explain the benefits of multibit processing.  From their press release:

“Modi Multibit smashes the price barrier in advanced multibit DACs.  It is the most affordable multibit DAC built on a modern architecture—from any manufacturer, in any country in the world.” 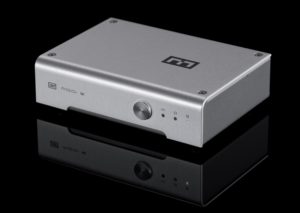 So—on to specs and listener experience.  The Modi 2 Multibit supports 16/44.1 to 24/192 via USB, 16/44.1 to 24/192 via Toslink/Optical and Coax, with 24/176 and 24/192 being NOS (non-oversampled.)  Moffatt and Stoddard are vehemently anti-DSD, so don’t expect that support any time never.  Not unexpectedly, it has three inputs on the back of the device, USB A, optical, and coax.  There are standard RCA outputs on the back of the device.  I used Schiit-provided individual RCA cables to feed the Vali 2 headphone amplifier, which I’ll review in part two of this post. The front of the device is a simple affair, with one button allowing selection between the three inputs. 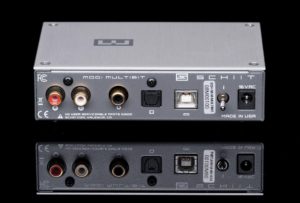 I tried to keep the extraneous variables to a minimum when doing come critical listening.  The signal path was Roon 1.2 on a MacBook Air and Time Capsule NAS to a Raspberry Pi 3, Audioquest Cinnamon optical cable to the Modi 2 Multibit.  This fed the Vali 2 headphone amp which was feeding my MrSpeakers Ether Flows.

The first album I booted up on Roon to test the Schiit DAC was one of my favorite guitar records, an HDTracks 24/96 version of Ben Harper’s The Will to Live.  Harper is a real disciple of the Weissenborn Hawaiian lap steel guitar, and his instrument carries a very distinctive sound, further differentiated by his amps and effects.  The track “I Want to be Ready” is a great example of this.  One can hear the metallic timbre of the steel strings interacting with what sounds like a ceramic slide.  Perhaps I’m exhibiting confirmation bias, but this is a classic Koa Weissenborn tone to me.  The reverb effect is reproduced in exacting detail, and clearly sounds better on this DAC than my previous desktop DAC.  Its detail retrieval and quickness come to the forefront, and I felt the music was more full in the soundstage department.  I can’t stress enough how this track emphasizes the interplay of the unusual acoustic guitar wood, steel strings, a non-metallic slide, and the reverb, and how that is brought into the forefront with this absolutely killer DAC.

In an attempt to see how well the DAC does with acoustic guitar ensemble music, I queued up my Redbook version of Avalon by Julian Lage and Chris Eldridge.  There are many excellent tracks on this album, but the collective repertoire piece “Ginseng Sullivan” is a perfect cut to allow the DAC to shine.  My blog readers know that I’m a big Critter fan, and that’s only due in part that he and I play the same guitar (I like to think that mine makes me sound like him!) and that his recording of an iconic Martin acoustic guitar was done so well on this album that it’s about as close to playing in person that I’m using it as one of my reference albums.  Once again, this is a great modern recording of the classic dry, fundamental vintage Martin Mahogany sound (although I’ll be the first to admit that the older Martins get the less relevant the side/back woods become tonally in my humble opinion.)  I can hear the chanticleer bells and simultaneous cutting of flatpicking these guitars, and the hard-driven Red Spruce tops can really handle a heavy-handed attack.  Schiit’s DAC does not disappoint in any way shape or form in its ability to faithfully reproduce Lage and Eldridge’s superb work and giving it some real life.

In part two of this series, we’ll discuss the Vali 2 hybrid tube/solid state headphone amplifier from Schiit that I have paired with the wonderful Modi 2 Multibit.  Schiit seems to be hitting on all cylinders right now, as this is a product I highly recommend.